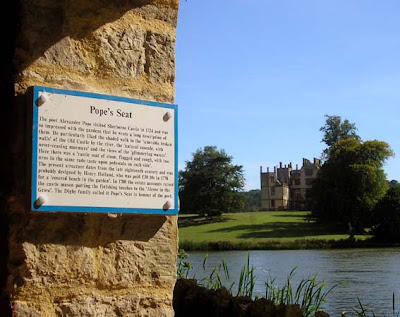 I visited Sherborne Castle in the footsteps of Alexander Pope, who came in 1724 and was inspired to write about the gardens. The stone bothy in the photograph would not have been in place at the time of Pope's visit, but the poet mentions the cascade and a 'rustic seat of stone'. Members of the Digby family decided to call the present alcove 'Pope's Seat' in the late eighteenth century.

The castle in the background, otherwise known as Sherborne Lodge (as opposed to the old 12th century castle, now a ruin) was built by Sir Walter Raleigh in 1594. The grounds and garden were landscaped by 'Capability' Brown.

Pope, the son of a Roman Catholic linen merchant and grandson of an Anglican clergyman, wrote his first verse when he was twelve years old. Pope made English translations in verse of the Iliad and the Odyssey by Homer. His income from these volumes enabled him to move to Twickhenham, where his study of landscape gardening began. One of the first books I ever bought in a secondhand bookshop was a small brown copy of Pope's Iliad.