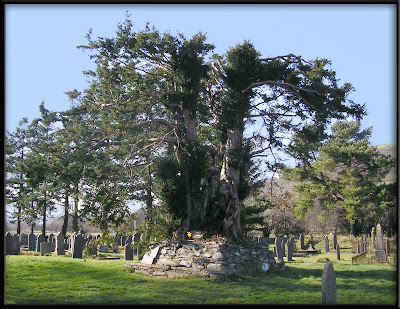 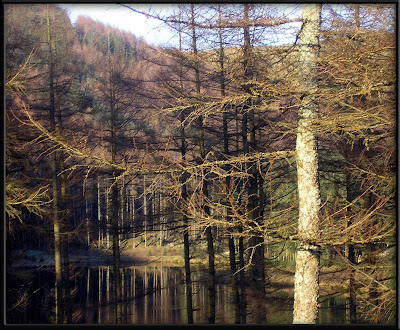 Above: the yew tree at Strata Florida, also known as Ystrad Fflur, Wales
Below: a sunlit glade in the forest at Nant yr Arian, Ceredigion, Wales

I visited the Poetry Visualized site on the recommendation of the Poets who blog site, and was impressed with the visual podcast of Seeing the Forest, with words by Belinda Subraman, photography by Cheryl Townsend and music by CaDra. I had to bear with a couple of slight technical hitches, but it was worth persevering with the player.

We have some wonderful forests in Wales, like the one at Nant yr Arian, where the red kites are fed. We also have some trees with special significance, like the venerable old yew in the churchyard adjoining the abbey at Strata Florida. Once again, this is a good place to watch red kites.

The yew tree is associated with the Welsh bard, Dafydd ap Gwilym. It has been damaged by storms and hit by lightning, and is no longer in its prime; but its literary significance lives on.
George Borrow, author of Wild Wales, was one of many travellers to write about the site.

The abbey at Strata Florida has many literary associations: I intend to explore some of these in a future post. Meanwhile, on the subject of trees, my brother and sister-in-law 'gave' us a (sponsored) tree for our 20th wedding anniversary. It is out there somewhere in the depths of Ceredigion, and we look forward to making a pilgrimage to find it.

Yes Caroline - a few glitches on the way but worth the struggle.

Perhaps it would be kind if I reported our glitches ... I thought it might be just my computer (or my technophobia!). The podcast showed off great potential for the 'mixed-medium' of word, image and music.