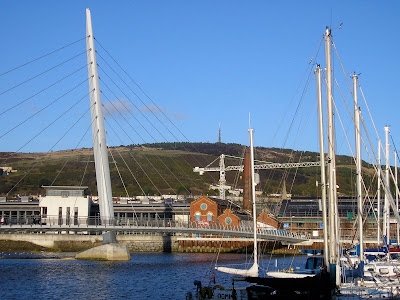 I was delighted to receive the latest edition, issue 11, of The Seventh Quarry poetry magazine, edited by Swansea poet and publisher, Peter Thabit Jones. This is a substantial magazine with a global outlook, comprising 80 pages of poetry and reviews from Wales, England, Northern Ireland, Italy, Greece, Romania, Lithiania, South Africa and America.

There are some excellent poems in this number, of which more in a moment; but I was particularly struck by the reviews of the editor's latest work, a verse drama entitled The Boy and the Lion's Head (Citadela, Satu Mare, Romania, 2009). The book has been published bilingually in English and Romanian: Dr Olimpia Iacob is repsonsible for the Romanina translation. Issue 11 of The Seventh Quarry contains an essay entitled 'A Story of The Need for Love' by Professor Alexandru Zotta about Peter's verse drama, and a substantial review by Livia Comşia.

The Boy and the Lion's Head costs £8.99 in the UK, and is by all accounts a most unusual read: Livia Comşia observes that 'no other similar dramas' have been written. The setting is Swansea's Kilvey Hill, a place that has clearly been supremely formative in the poet's artistic development. We are all familiar with Cézanne's relationship with Mont Sainte-Victoire (and here) in Provence. Many of us in this part of Wales are familiar with the poet John Dyer of Aberglasney and his poetic attachment to Grongar Hill, which lies just beyond the boundary of the hidden garden. Kilvey Hill has become a powerful Leitmotif in Peter's creative landscape. He explains his literary intentions in this way,

'I have tried to show the impact language/words make on a small boy's imagination:
in a narrative of impending grief'.
The stage is set; and if we would like to explore the unfolding drama, we would do well to read the lyrical story of The Boy and the Lion's Head for ourselves.

This short blog post can do little more than scratch the surface. It is good to find a tribute obituary by Peter to Aeronwy Thomas, his 2008 travelling companion for a six week tour of the USA. I particularly liked the moving words 'To Aeronwy Thomas' by Lidia Chiarelli. Other poems that caught my eye were 'Ice Maiden' by fellow poet and blogger, Susan Richardson (do take a look at her new blog, Polar Poets, which she shares with Siobhan Logan), Stanley H. Barkan's poem for the late Menke Katz, 'Blackberrying in Spring Glen' and Don Atherton's 'Macchu Pichu', saddled between two camel-like humps (in contrast to the wool-and-camel-hair gown in Susan's poem).

For those who like their poems to have wings, my eye was drawn to the mention of owls in contributions from two American poets, namely in 'Revelation' by Robin Metz and in 'Lies for Icarus's Mother' by Laurie Byro. Hunting birds and famished eagles inhabit the world of 'The Poet' by Carolyn Mary Kleefeld, and my poem, 'Migration Mirage', pays homage to our forked-tailed summer visitors. Professor Sultan Catto's vibrant poem, 'Escape into Time', makes us realise in this cold snap that summer is not too far away, as we catch sight of a butterfly in a faraway city of dreams.

An evening of poetry, drama and song

at the Dylan Thomas Centre, Swansea

At Knox College, students will study the life and literary works of Dylan Thomas; in Wales, they will study the impact of Wales’s natural history and cultural dynamics on Thomas’s work.

Thanks for introducing me to what sounds liek a very interesting poetry publication, I haven't heard of Seventh Quarry before..

Yes, CGP, it is certainly a magazine that I enjoy and feel is excellent value. I love the international flavour, too.