Postcard 63: Festival of the Trees - The Rufus Stone

Welcome to the UK and to my Festival of the Trees post! 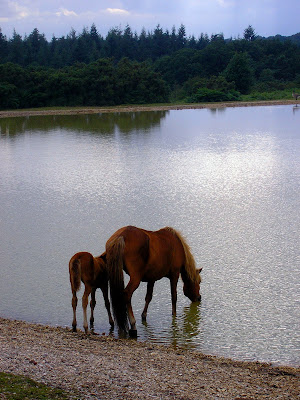 Summer evening in the New Forest:
mare and foal 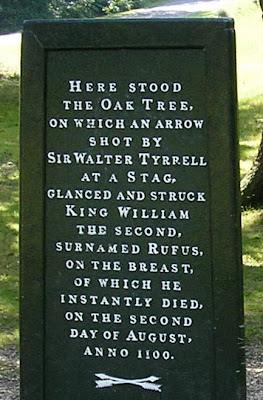 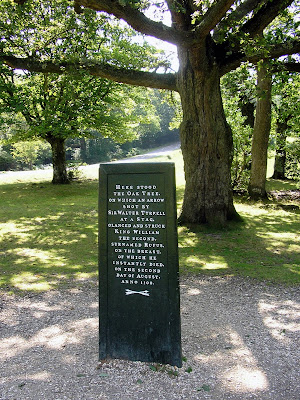 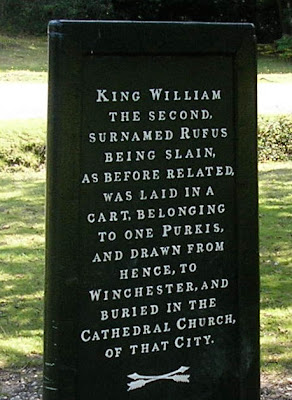 "Here stood the oak tree,
on which an arrow shot by Sir Walter Tyrrell at a stag,
glanced and struck King William the Second,
surnamed Rufus on the breast,
of which he instantly died,
on the second day of August, ANNO 1100."

The Rufus Stone, stands in a shady glade in the New Forest in Hampshire, UK, set back from the A31 road, near the village of Minstead.

The stone memorial has three faces (and is a bit like a trig point). It was erected in honour of King William II, aka as William 'Rufus', son of William the Conqueror by John, Lord Delaware (who had seen the oak tree) in 1745. The Conqueror's son died in the immediate vicinity on 2 August 1100 as a result of an arrow fired by Sir Walter Tyrrell. The killing was said to be an accident rather than a murder. On hearing the news, Henry, the youngest brother of the departed monarch, was hurriedly proclaimed king by the barons, in a bid to beat his eldest brother, Robert of Normandy, to the throne of England.

The bones of William 'Rufus' lie in a mortuary chest (press link, then scroll down) in Winchester Cathedral, along with those of other members of the Royal Family, such as King Cnut and his wife, Emma. You may be wondering how the body turned up in Winchester for burial. A man known as 'one Purkis' laid the royal corpse in a cart and took it to the cathedral city. The original Rufus Stone became defaced and hard to read: a replacement memorial was erected in 1841. 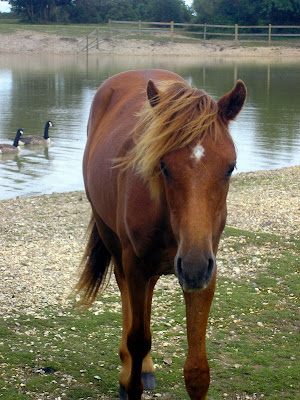 The face of the New Forest

The New Forest today is a wildlife paradise. The following species of vertebrates and invertebrates can be found: ponies, deer, cattle, badgers, foxes, donkeys, bats, mice, water voles, adders, grass snakes, owls, warblers, curlews, spiders and butterflies. The ponies, donkeys and cattle belong to commoners, who receive grazing rights for a small fee. I imagine that there is a similar arrangement for pigs and sheep. 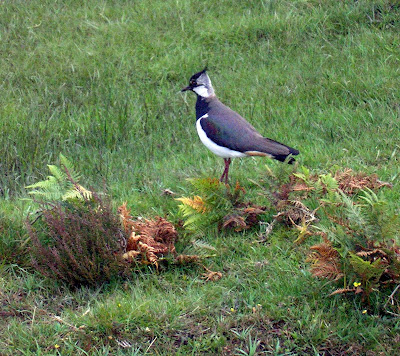 Above: a Lapwing
Below: a forest pig enjoys a wallow 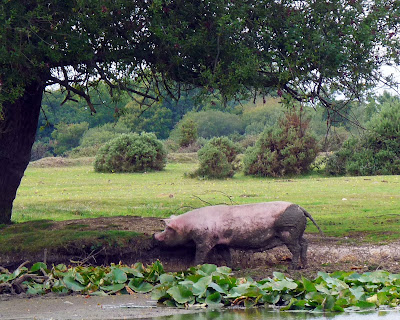 There are also many species of tree, e.g. oak, beech, holly, sycamore, alder, ash, silver birch, sweet chestnut, horse chestnut, crab apple, blackthorn, hawthorn, viburnham, whitebeam, pine, redwood and yew. Some of the trees are very special: you can read here about the Knightwood Oak, the Adam and Eve Oaks and the Eagle Oak. Wouldn't it be wonderful if the White-Tailed ('Sea') Eagles returned, albeit with a bit of help? We so enjoyed watching these magnificent birds on the Scottish islands of Skye and Raasay last summer. There was great excitement in 2009 when a new kind of fungus, a yellow form of Phellodon melaeucus, was discovered in the New Forest. The fact that this area has been managed in traditional 'commoning' ways, without the intensive use of artificial fertilizers and chemicals may contribute to the amazing biodiversity and number of rare species.

I have never heard of that before, Caroline. I look forward to more tree stories.

I remember learning how William Rufus died but didn't realise there was this stone at the spot.

We saw a fish eagle on Skye last year too.

very interesting post indeed. I've never been to the New Forest. The West Coast of Scotland is stunning - I blog from the east coast.

What a lovely post. I loved the stories....I had never heard of a forest pig.... My Festival of The Trees Post..Herbie The Elm Tree

Hi Caroline, I love this post - history, lapwings and forest pigs, how lucky you are!

Thank you for visiting me at Out walking the dog. This is my first Festival of the Trees. I'm making the rounds and am so impressed with what I'm finding. Yours is a delightful blog.

Hi Caroline - I've just looked at your profile and wow the post on my blog certainly would have been of interest to you. I left a message on that article but will repost here that I think there is a connection to the Huntingtower and John Buchan as the Buchan family came from Perth and I am sure there is a leap of some sort in the Huntingtower book - tho I am only going by little snippets as I have never read the book.

Yes the Root of Jesse is from me too - more tailored as a website with lots of great links anyone can pop by and read but there are no comments from readers and no followers.

See you like Narnia too - I grew up in the land that he based Narnia on and ended up living beside his childhood home and saw the lion doorknocker - I walked the same streets and roads he once did!

Wonderful to meet you - and I found you through April's blog. Been to Balla and that day the Mary Jones exhibition was on - what a surprise to be able to show my kids the bible that they had heard many night time stories about.

The horses in the water and the lapwing are wonderful! What an interesting stone and story.