Postcard 26: No wombles of Wombleton 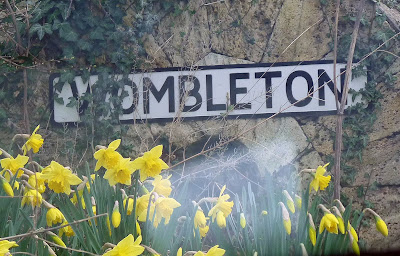 We have just returned from Yorkshire, where we found ourselves in the village of Wombleton, not far from Nunnington Hall. It made me think about the wombles of Wimbledon Common. As we drove along, all the Mike Batt Womble songs came flooding into my head ... 'you're invited to a ping-pong ball', 'It was early one morning; the fish were jumping high', 'Cousin Yellowstone is returning' ... and I began to wonder whether there was, in fact, any womble link with this Yorkshire village.

I have now done a little web research, and realize that the name 'womble' came from the lips of Beresford's young daughter, Kate, as she ran about on Wimbledon Common.

In the course of my investigations, I came across a fascinating feature from The Times (11 August 2007) on Elisabeth Beresford, creator of the Wombles. Did you know, for example, that Walter de la Mare was her godfather and that Eleanor Farjeon was her godmother? Here's to the Wombles for leading the way in recycling and 'green thinking' for the younger generation!

Interesting facts about Wombles Caroline - that seems a long time ago.
You must have come fairly close to here in your Yorkshire journeys - hope you caught some of our lovely weather.

I loved the wombles and they must have had a significant effect on my way of thinking, recycling etc. I'll need to see how many names I can remember without looking - can I consult an atlas?,

Amy grandmothers maiden name was Womble. When I did a bit more research it seems the name came from a village called Wombwell in Nottinghamshire. Can't see any link with wombleton though