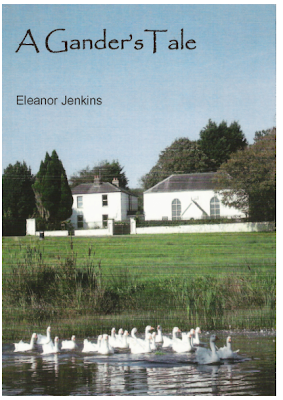 'Consider the birds ... but listen to the message behind the Gander's Tale' David Gill
The Gower Peninsula - known locally simply as 'Gower' - was the first area to be designated an Area of Outstanding Natural Beauty (AONB). Many vistors to Burry Green approach this lovely Gower village from the rise known as Cefn Bryn, with its sweeping views across the Loughor Estuary. The building of Bethesda Chapel was financed in some measure by Lady Diana Barham. It opened for worship in 1814. William Griffiths, a Calvinistic Methodist who later became known as the 'Apostle of Gower', served as Minister from 1823 until 1861.

As you can see from the photograph, the village is dominated by the fine white-washed chapel and by the pond. Chapel Elder, Miss Eleanor Jenkins, has had an eye on both these features: her book is the culmination of her astute observations of the geese who live on the green. Eleanor's aim, however, in writing about the gander and his friends was to link these avian observations with Biblical truths about Jesus Christ. 'A Gander's Tale' is made up of fifty short chapters or 'goose fables' (in the sense that Paul White used the term for his 'Jungle Doctor' series), which began as monthly articles in the Bethesda magazine.

We were delighted to attend the launch of the book last week at Old Walls Leisure: it was a wonderful occasion, and there was a good crowd. 'A Gander's Tale' is adorned with Eleanor's beautiful colour photographs. Each 'chapter' contains a Christian message in addition to unusual insights into the life of the geese themselves. Did you know, for example, that a Frizzley Sebastapol is a breed of extra-feathery goose? If you buy a copy of the book, you will discover the joys of life in a Gower village and why Goosey should perhaps have been called Gandalf!

The link below will allow you to purchase a copy of the book or to opt for a free download.
Posted by Caroline Gill at 16:11

Hi Caroline, brings back nice memories of train trips along the Gower. Have a great weekend, Marc.