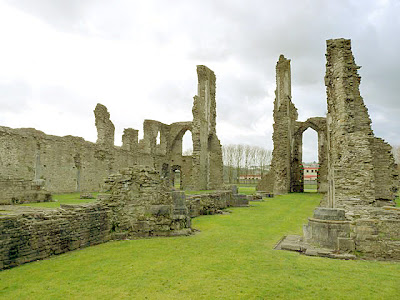 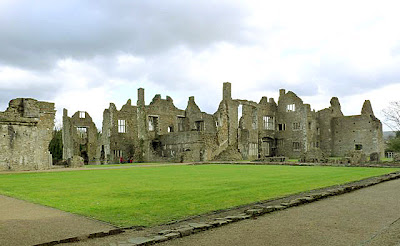 We visited Neath Abbey (founded by the Cistercians c.1130) on a grey afternoon. It was a much larger site than I had remembered from a previous visit; and although it lies in a post-industrial and rather built-up area, it has a certain feeling of tranquillity about it, induced to some extent by the ambience of the canal that runs along the abbey grounds. Gerald of Wales, aka Giraldus Cambrensis, alludes to one of the Welsh poets, Meurig, aka Mauricius Morganensis, whose brother, Clement was Abbot of Neath. It seems likely that Meurig was the author of several books in Welsh, in addition to a volume of Latin epigrams. He appears to have been Treasurer of the Diocese of Llandaff in South Wales. It has been asserted that Meurig was responsible for a Welsh translation of St John's Gospel, but this has not been proved and may not, in fact, be true.

Neath has been described in very different ways over the centuries. You will find two opposing descriptions here, showing how its appearance was radically altered between the 16th and the 19th centuries. The abbey was dissolved in 1539, and copper and lead ores were being smelted on the site during the 18th century. These days, Neath is well known as the home of the singer, Katherine Jenkins.

Postscript: I find it curious that the words ambience and ambiance come under the same entry on the AskOxford site, and yet are given distinct meanings in my copy of The New Oxford Dictionary for Writers and Editors.
Posted by Caroline Gill at 09:23

Those Cistercians got everywhere didn't they? All the big abbeys round here belonged to them - now they are all ruins - if they could have seen the future I wonder what they would have thought to it all.

Hullo - don't know if this is the right one of your (many) blogs, but you posted on my blog, Tales From the Chickenhouse, about Buchan.

I think, of the Hannay novels, my favourite would have to be The Island of Sheep. Of the Dickson McCunn series, I am fond of Huntingtower (not least because it deals with my own neck of the woods) and The House of the Four Winds, because I am a lover of all things ruritanian. Of the 'historical' set, I have so far read only John Burnet of Barns (but very much enjoyed it).
Of the Leithen novels I am reading just now, John McNab is my favourite: I laughed at least once every page, and I was particularly pleased with a certain proposal scene...

If you like ruined cathedrals, you must come to St Andrews. We have a splendid one. And a haunted tower - how can you resist it!

Funny that you were surprised by the size of Neath Abbey when you revisited - I had exactly the same experience! Hadn't remembered the scale of it at all for some reason.

This is neat! I love seeing old ruins. I've been to Tintern Abbey. Castles and abbeys like this are things we just don't have in America.