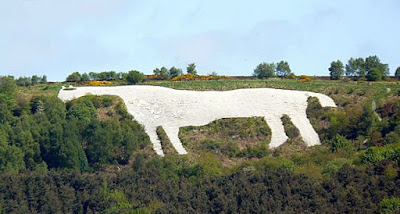 White horses on chalk hillsides have long been a source of fascination. We visited this one last summer, on our way to see the house of The Mouseman, which I shall mention in a future posting. The Kilburn horse has the largest surface area - just over an acre - of any of our chalk horses, and is the most northerly one of its kind in Britain. It is not, however, a very ancient one: it was completed in 1857 by a school master, John Hodgson, whose friend, Thomas Taylor, had seen chalk figures on his travels in Wiltshire. Harrison Weir was responsible for the design, and the area was cleared by 31 assistants and the scree was given a lick of whitewash. The horse has had a chequered 'career', but stands in splendour for all to see today.

You may be wondering why I have chosen the white horse as a motif in this blog about landscape AND literature. Those of us of 'a certain age' (like me!) will remember those 'snowy white horses' on the television series of our youth, and the footage of them galloping through the waves. The signature tune still hums in my head, but it is actually a different white horse that I have in mind, The Little White Horse, in the children's fantasy novel by Elizabeth Goudge. The story has nothing to do with the Kilburn site, but is a charming tale in its own right. You can read a comment about it from the New York Times at the Happy Wonderer's blog. Goudge's tale has just been released (6 February 2009) as a film, The Secret of Moonacre. Apparently the allegorical tale was one of J.K. Rowling's favourite childhood books. It won a Carnegie Medal in 1946.

I have yet to see The Angel of the North in situ, but I read in The Guardian (11 February 2009) that Kent, the county of my childhood, is to have an enormous white horse on a hill. The horse icon is the brainchild of Turner prize-winner, Mark Wallinger, who won a recent contest to design a 'landmark sculpture' for Ebbsfleet. The sculpture is due to be over twice the height of its northern cousin, and the sheer expense is proving problematic in this climate of recession. Wallinger's horse was inspired to some extent by a horse painting by Stubbs: Jonathan Jones in The Guardian noted that its 'whiteness' recalls the chalk figures.

Wiltshire boasts thirteen white horse figures out of the twenty-four known in Britain. Soil samples from the Uffington White Horse have given three approximate dates for this Early Iron Age or Late Bronze Age creature: 1400-600 BC, 1240-360 BC and the latest 900-340BC. Modern white horses can be seen in places as diverse as South Africa and West Virginia, Morocco and New Zealand. The horse motif appears in Lascaux cave paintings of about 16000 years ago. The first domesticated horses have been attributed to the Botai Culture of Kazakhstan, of 'around 5500 years ago', according to research undertaken by the universities of Bristol and Exeter. Homer, of course, mentions the Trojan Horse, which concealed the soldiers. I particularly like the 7th century BC representation here, with all the faces peeping out!
Posted by Caroline Gill at 08:44

On a very clear day I can see the white horse from my garden, caroline. I don't live too far from teh Angel of the North and find that very impressive. The mouseman - in Hubberholme church, in Wharfedale, the pews are made by him and as you sit there you can run your hand down the side and encounter a wooden mouse.