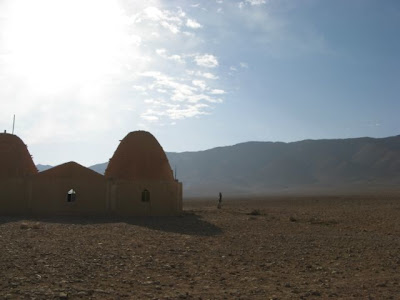 House in the desert on the way to Palmyra
Photograph: © Mary Roberts 2009

I am very grateful to Mary Roberts for the opportunity to post this photograph. It shows the domed beehive-shaped buildings in the Syrian desert, the flecks of cloud, the shadows and the mountains beyond. Palmyra is - as yet - off-limits.

I first 'encountered' the site of Palmyra when I was taking a course in Roman Cities as part of my degree in Classical Studies at the University of Newcastle upon Tyne. I had spent my teenage years in East Anglia, with its wide skies and panoramic views, but nothing had prepared me for the scale of the desert and of the Roman buildings (seen, alas, only on slides in a lecture theatre) that make up the extraordinary city, now a UNESCO World Heritage Site.

Palmyra had long been an oasis settlement on the caravan route that linked Persia with the Mediterranean ports in Syria and Phoenicia. The Silk Road conjures up all kinds of exotic images in our minds. The Romans came in the first century AD, and added their mark. The settlement had been part of King Solomon's kingdom in earlier days. The remains of the Roman theatre can be seen today.

There has been great excitement recently over the discovery of remains from the Hellenistic city on the site. It is known from the archaeological finds that dromedaries, pigs, sheep and pottery all played a part in city life during this era.

You may be wondering why I have written about Palmyra on this 'Landscape and Literature' blog. The answer lies in the person of Zenobia, the third century Queen of Palmyra who 'claimed' descent from Queen Cleopatra of Egypt and Queen Dido of Carthage. Zenobia followed in the footsteps of previous Syrian and Abyssinian queens like the Queen of Sheba (linked article by Michael Wood). She could be described as the Boudicca of the city in the sense that she was a warrior queen, intent on leading her people against the Romans. Zenobia is mentioned in the texts of many ancient historians. Pollio refers to her beauty. She features in Chaucer's Canterbury Tales in The Monk's Tale (see Cenobia) and also in Masque of Queens by Ben Jonson (1610). Giovani Paisiello wrote an opera, Zenobia in Palmyra, and she is the subject of novels like The Queen of the East by Alexander Baron.