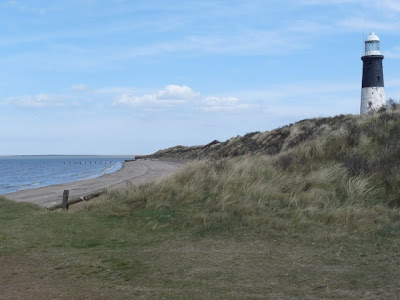 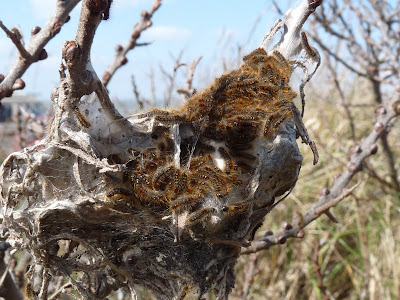 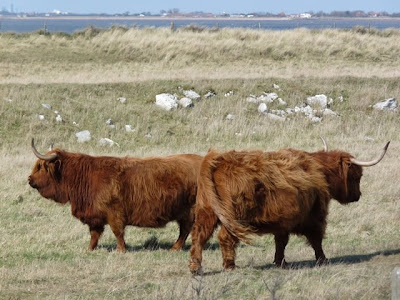 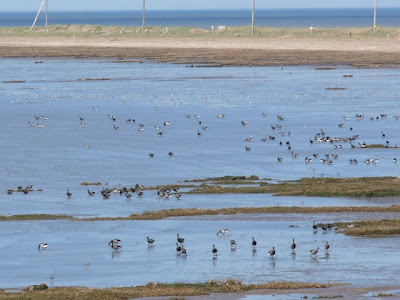 Views of Spurn Head
Do click the second picture for a closer view (not for the squeamish!)

Those who have read previous postcards will know that I enjoy visiting places linked with literature. This postcard is a bit different, because it links a peninsula with a composer.

I had long wanted to visit Spurn Head, with its wild beauty. It is in many ways a liminal place on the edge of nowhere, and yet it is so close to Hull and the busy shipping area of the Humber.

Ralph Vaughan Williams composed 'Spurn Point', his Andante sostenuto, in 1926 as one of Six Studies in English Folk Song for Cello.

We drove through low-lying land and eventually spotted the black-and-white striped lighthouse. As we headed out along the spit of land, with saltmarsh estuary on our right and the open sea on our left, I spotted web after web on the furze bushes that lined the road. When we had parked the car, I went to examine them, thinking that perhaps they were going to be nests for an unusual species of bird. It became all too apparent that my assumption was way out, for they were utterly heaving with young caterpillars. I asked a man sporting a deerstalker and a pair of binoculars, who told me that I should have read my Yorkshire Wildlife Trust ticket, since it contained a warning about the toxic nature of the barbed hairs of the caterpillars of the native Brown-Tail Moth (Euproctis Chrysorrhoea).

Our ticket informed us that the creatures emerge in spring from their white webs to feed on sea buckthorn. Apparently they shed their skins, releasing the hairs before 'pupating and flighting' as adult moths.

As if the moths weren't interesting enough, we learned that an apparently unringed white stork had been spotted that afternoon.

I'd like to visit Spurn Head too, Caroline. One of my students last term wrote a beautiful poem about it - she grew up relatively nearby.