Postcard 55: Of Bards and Birdboxes 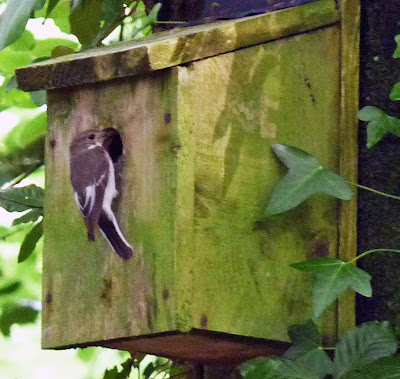 Female Pied Flycatcher
(Above and immediately below) 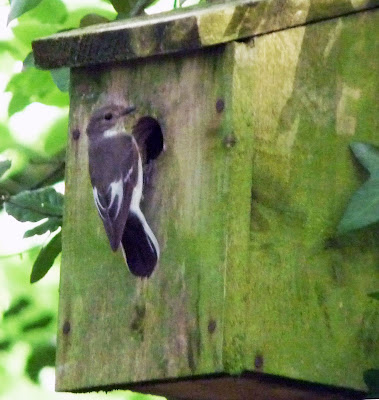 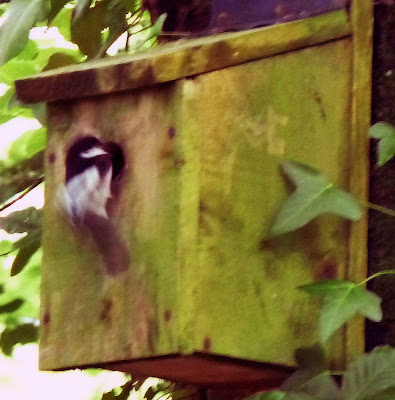 I wonder whether you have been taking part in the RSPB Feed the Birds Day this weekend. There have been over 100 events across the UK.

I took these photos earlier this year in one of our favourite areas of woodland in Carmarthenshire. I'm afraid the quality of the pictures is not very good, but the birds were so fast that it was hard to click quickly without jolting ther camera. We did not like to go too close.

We received a note from out local branch of the RSPB yesterday, telling us the good news that the two nestboxes we sponsored in Cwm Clydach RSPB Reserve had both been used successfully.

One of the boxes had been taken over by a pair of Pied Flycatchers. The nest building was underway on 20 April 2009. The first egg was laid on 6 May 2009 and a total of 4 eggs hatched on 26 May 2009. Alas, there was one casualty - but three of the four young fledged successfully.

The second box was used by a Blue Tit family. The nest was built around 16 April 2009, and the first egg was laid on 30 April. This time 8 eggs hatched on 19 May and all the chicks fledged. Great news!

You may be wondering what this has to do with literature. Well, I was reading the current RSPB magazine, Birds (November 2009), and was delighted to find a reference to a letter by Professor David Morley of the University of Warwick. Professor Morley has developed what he calls Bard Box poems. These poems - which often resemble the call or movement of the bird in the box, or the shape of its nest - are painted on to the outside of the nestbox and allowed to weather, so that the young 'nest in a poem and the fledglings then emerge from within a poem'. Humans enjoy the spectacle of these Bard Box examples of public art, so it is not only our feathered friends who benefit.

N.B. Professor Morley issues a word of warning to budding Bard Box artists, 'I have a patent pending on this idea so hands off, eco-capitalists!' ...

That said, do take a look at Professor Morley's Strid and Sessile blog entry to find out more about this fascinating project.

I wonder how you celebrated Feed the Birds Day. Let me know if you did anything interesting.

Incidentally, we were just having lunch yesterday when a large male Sparrowhawk perched on our fence. We sometimes get a TITTERING, a TIDING, a GULP, a MURDER or a CHARM of Magpies, but this was the first time I have seen a Sparrowhawk in our neck of the (town) 'woods'. Is there a collective noun for Sparrowhawks, I wonder?
Posted by Caroline Gill at 22:41

Interesting idea Caroline. Incidentally those pied flycatcher photos are excellent.
the poetry idea reminded me of a walk near Kirby Stephen - it is called the Poetry walk and poems are chiselled into stone in various places, celebrating the countryside the walk passes through. I love this kind of thing.

Oh i thought I'd commented on this! So glad your sponsored birdboxes were successful! I love the Bard Box idea,