Postcard 37: The 'auld crag' of Bass Rock - and Tantallon Castle 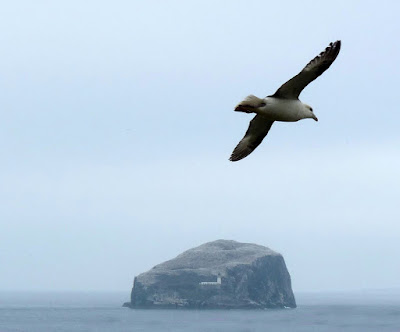 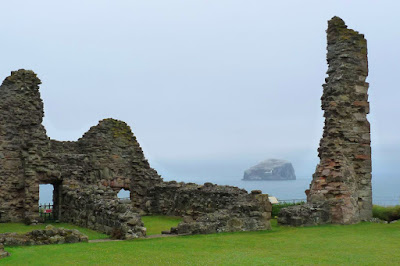 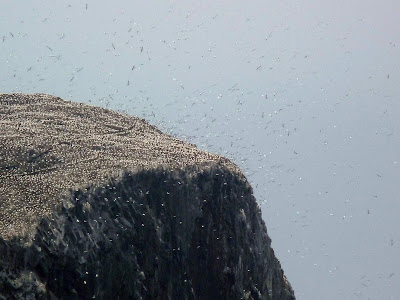 Top: Bass Rock off the Scottish coast
Middle: View from Tantallon Castle
Bottom: The Gannetry on Bass Rock, the oldest-known Gannetry in the world (taken from Tantallon)

On our recent holiday in Scotland, we spent a very happy couple of hours at Tantallon Castle on the east coast. The castle has a spectacular setting, but sadly we did not have time on this occasion to go to the spot along the coast from which this castle can be photographed to best advantage. You will, however, get a flavour of the site from my shots above.

St Baldred was an early visitor to Bass Rock. He died out there in c.606 AD (although the date of his death seems to be in some dispute).

About a hundred members of a garrison were posted there in the mid-sixteenth century. Their survival in this inhospitable place was due largely to the gannets, who carried fish to the island and provided material for fires (intended for gannet nests).

We learn about Bass Rock from the account of Jean de Beaugué, a French writer who published L'histoire de la guerre d'Ecosse in 1556, concerning the campaign of the French auxiliaries in Scotland from 1548-9. Jean de Beaugué wrote of the rock that 'those who enter it must climb up by the help of a strong cable thrown down for the purpose; and when they have got with much ado to the foot of the wall of the castle they sit in a wide basket and in this posture are mounted up, there is no other way.'

These days the 21,000 pairs of gannets are allowed to enjoy their realm on the rocky sentinel of the Firth of Forth without the presence of human residents. The nesting fulmars prefer the cliffs around Tantallon on the mainland. The 19th century lighthouse on Bass Rock built by David Stevenson (of the Stevenson dynasty of lighthouse builders) continues to serve as a key beacon for ships. Eider ducks float in rafts on the sea, diving for mussels.

Oh, my! That rock castle is beautiful beyond words! It's even better than "City of Rocks" in New Mexico, USA. I could look at that photo all day long and my fantasy life would take over, just like it did when I was a child in NM!

Great photos Caroline, and especially getting the seagull close-up in such clarity with the rock behind. Cheers.

I love Bass Rock, I love that when the gannets are there, the rock is white even from miles away.

These shots are so beautiful! I love the view of the rock from the castle in the second photograph. Spectacular...and one I'd only see in a magazine like National Geographic.