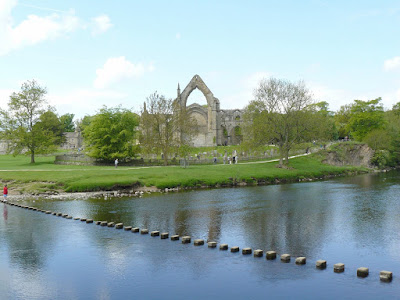 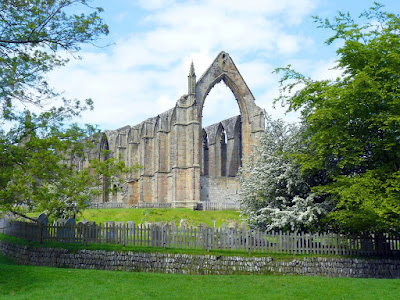 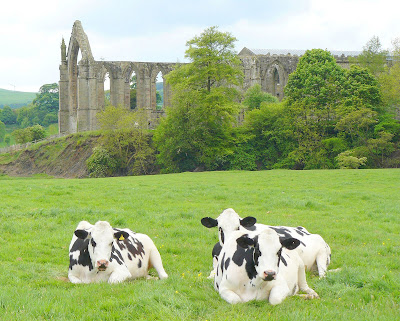 Bolton Abbey, Yorkshire
Wordsworth was inspired to write his poem, 'The White Doe of Rylstone', as a result of his visit to Bolton Abbey. A revised draft of the poem, with textual alterations in the handwriting of Mary Wordsworth, the poet's wife, was bought by The Wordsworth Trust in 2007 for £9000. Poets struggle with the issue of revision: it was Paul Valéry (1871 - 1945) who wrote that 'a poem is never finished, only abandoned'. Wordsworth's poem was drafted initially in 1807/1808. The revisions were made post-publication, prior to the second edition of 1820.
It would be very interesting to know your views or personal revision policies. Do you feel that your poems continue to evolve post-publication or is there a point at which the words 'set' for better or worse?

On a different note, Australian poet, Emma Jones, is to be the next Poet in Residence for the Wordsworth Trust.
Posted by Caroline Gill at 11:40

You are getting near to my home territory now Caroline. Lovely spot.

Nice post and photos. For me, I can think a poem's finished, but may still revise it when I return to it at a later date. At the same time, some poems are not revised again.

Just delicious, Caroline, delicious. That first photo makes me want to be there instead of So. California!

On your postcards, could you add how much in $ they are? Would make it easier for us in America to order!

I've not been there for years!

My poems are always evolving, though publication does sort of set them in stone. Having said that I have revised some poems after they've been published. I wouldn't destroy the earlier version in that case though...

These are beautiful! I went to Tintern Abbey once and was amazed at the size.