Postcard 21: A blackbird in Adlestrop 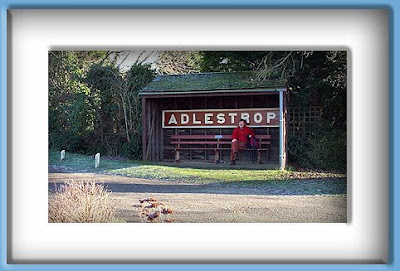 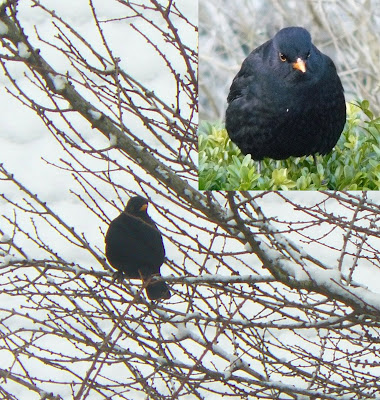 I mentioned in a former postcard that I would return to Adlestrop. We visited the village on a very icy day, and enjoyed imagining the railway before Dr Richard Beeching's so-called 'reforms'.

I recall hearing the sound of a blackbird on our walk back towards the Post Office from the church, and thinking how wonderful it was to listen to a blackbird in Adlestrop! I have always wanted to understand the poetic relationship between the blackbird line in the poem by Edward Thomas and the parallel line in Morning has Broken ('Blackbird has spoken ...') from the pen of his fellow poet, Eleanor Farjeon. Thomas was introduced to Farjeon by Clifford Bax in 1912. Edward Thomas wrote one book specifically for children, Four-and-Twenty Blackbirds, published by Duckworth in 1915.

An entry for the previous year, 23 June 1914, in the field notebook belonging to Thomas recorded the blackbird's song and a hiss of steam. Thomas had been travelling by train to visit another fellow poet, Robert Frost, at his cottage in Leddington. The train would have come to a halt at Adlestrop Station. Thomas saw meadowsweet and willow herb a little later on his journey as the train drew in to Chipping Camden.

Eleanor Farjeon brought out a book for children entitled Martin Pippin in the Apple Orchard in which she describes the blackbird's whistle. James Guthrie published a book by Thomas, The Friend of the Blackbird, in a Pear Tree Press limited hand-made edition in 1938, years after the poet's death. Shortly before his dying day in France, Thomas mentioned in a letter to Frost from 244 Siege Battery that he had not heard the song of a blackbird. A fellow First World War poet, Sassoon, in contrast, noted in his poem, The Distant Song, that 'a blackbird sang' on the battlefield beyond the enemy line.

Adlestrop has been one of my top favourite poems for nearly the whole of my life.

I frequently walk along a pedestrianised railway and, as soon as the weather gets hot, sooner really, once the birds get singing and the may blossom comes out . . . I start thinking of Adlestrop every time I walk there.