Postcard 18: Monarch of the Isle 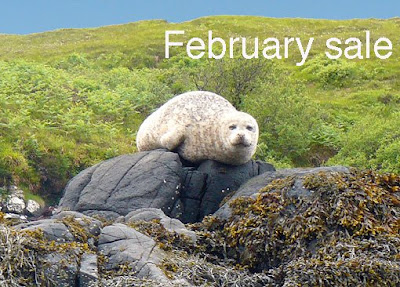 You are invited to view the February Seal Card Sale on my Coastcard site.

Speaking of seals, I photographed this magnificent and comfortably curious creature on the Isle of Skye. There are wonderful seal colonies and it is a joy to travel by boat in search of them. Many make their home on the skerries or reefs of little rocky islands that abound around the coast and sea lochs in this area. The word 'skerry' comes from the Norwegian language. A 'sker' in Norse is a rock in the sea. The Gaelic form is 'sgeir', and in Norway, the uneven rocky edge of an island fringe is known as 'skjærgård'. The Scottish coastline around the Western Isles, with its indentations and offshore skerries, is the outcome of a relatively recent submergence. The Scots term for fjord is 'firth'.

I grew up in East Anglia, where there are seal colonies along the North Norfolk coast. Occasionally a seal runs into danger, and it is always heart-warming to read of cases like this story form the Eastern Daily Press in which a sea creature has been successfully rescued, restored to health and returned to the ocean.

I was thinking about seals in literature. It is easy to name poems and prose pieces about a number of our sea creatures (notably The Walrus and the Carpenter by Lewis Carroll), but how many seals can you recall from literary sources?

For a veritable marine menagerie I would recommend the poetry book, Creatures of the Intertidal Zone (scroll down the linked page) by Susan Richardson, published by Cinnamon Press. The poet follows in the footsteps of Gudrid, an eleventh century 'Viking heroine'. Within the pages of the volume you will encounter not only seals but also whales, the hermit crab and a colony of penguins.

Sea Creatures on the web

What a wonderful photograph!