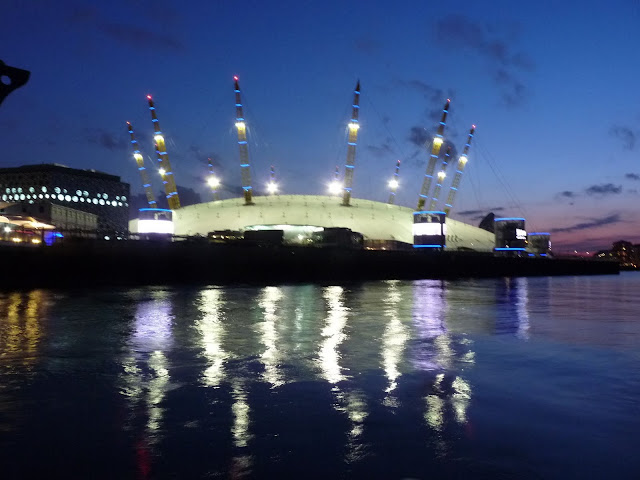 Heading back to Greenwich on The Thames Clipper
from the O2
(May 2010)
It was only yesterday that I was blogging about my early visits as a baby and toddler to the squirrels in Greenwich Park. I have been back to Greenwich many times, and feel a strong connection with the area. I love to take the Thames Clipper from the London Eye, and approach Greenwich by water. You get a good view of the Naval College, the Maritime Museum and the Park, with its Meridian. Sadly the Cutty Sark is not on show at present, but restoration work is underway. However, the current headline story relating to Greenwich concerns not a small grey mammal but a Leviathan-sized skeleton. 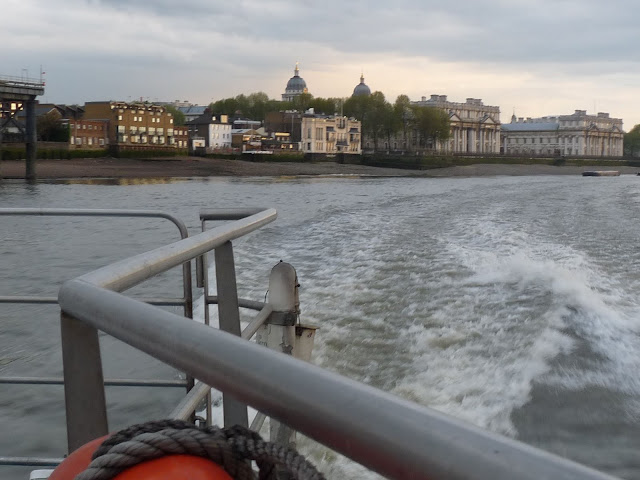 Drawing out of Greenwich
on the Thames Clipper
The Moby Dick-like tale relates to Bay Wharf in Greenwich and the recent finding by archaeologists, working for Pre-Construct Archaeology Limited, of a colossal North Atlantic Right Whale from north Atlantic waters, probably in the areas between Spitzbergen and Greenland. I am grateful to the History Blog for alerting me to the sad, sad story of this 200 year old headless corpse of a creature that died at some point between the age of 50 and 100. The remaining skeleton weighs in at 60 tons and is a mere 52 (Imperial) feet long. It seems to have fallen foul of whalers and their harpoons. Whales were prized in the 17th and 18th centuries for their oil, and the word 'right' in the name indicates that whales of this species provided quality oil for lamps, soap-making and industry. Whale bone was used for corsets.

Can a sad story like this have any kind of happy ending? Please note, I have NO wish to endorse the killing of whales. Those who follow my blogs will know the immense pleasure I get from watching creatures like Basking Sharks in their natural habitats. However, this sad mammal is already well and truly dead. DNA tests on its skeleton will help scientists in their quest for knowledge about the genetic diversity of this particular Right Whale. It will also help to fuel our understanding of the negative impact of whaling in terms of the future survival or otherwise of a particular species. Perhaps the discovery of 'Moby' will challenge us all to reconsider the part we can play in protecting creatures at risk. 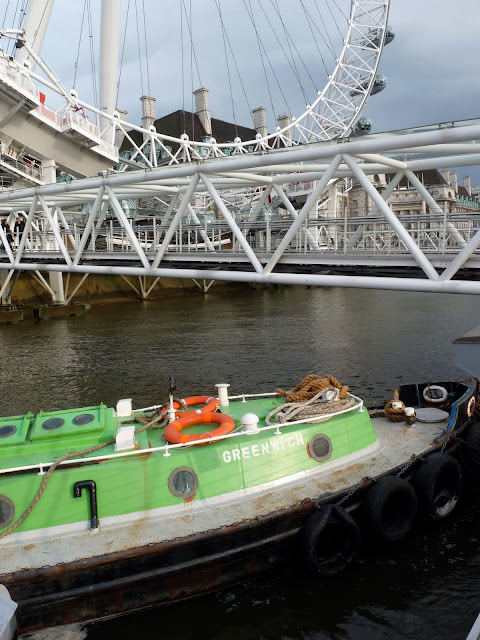 The London Eye,
where we caught the Thames Clipper

'Like the creature in Herman Melville's novel,
it was a giant whale of great age.'

I didn't know about the discovery of this whale Caroline - amazing what lurks beneath the water.
I love your photograph taken from the boat - London is such a beautiful city - I wish I went more often.

I was fascinated to read about this in the paper recently Caroline. An amazing discovery but I think on reflection very sad. I don't suppose there were many ethical considerations 200 years ago.

Lovely photos of Greenwich and the Thames Clipper. I hope they are able to restore the poor old Cutty Sark. I remember seeing it many years ago on a school visit.