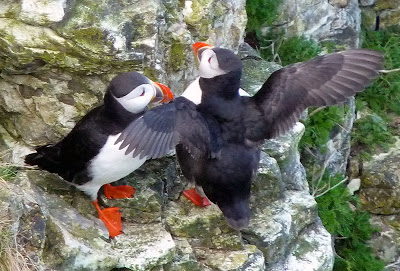 A year ago I much enjoyed reading Sea Room, a book about the Shiant Islands by Adam Nicolson, who inherited the small archipelago from his father. Those who follow my blog posts will not be surprised to learn that the Puffins were among the star members of the cast for me - all 240 000 of them. It came as something of a shock, though, to read that some of these Amber Conservation Status birds ended up - and not so long ago - as food for humans. 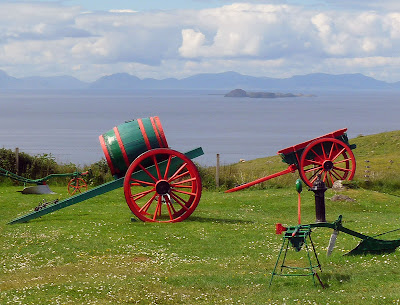 Last month, we spent a happy afternoon at the Museum of Island Life at Kilmuir on Skye [above]. This fabulous museum is situated between Flora MacDonald's grave and the cool waters of the Minch.* 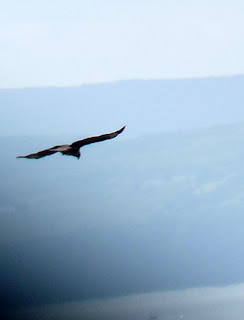 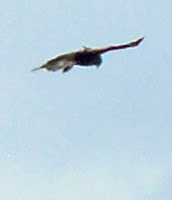 The visibility was quite good on the day of our visit: we watched a Golden Eagle hovering above us in the distance, and noticed some very strange landforms out at sea. 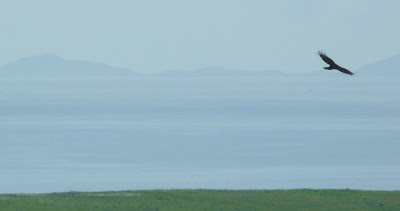 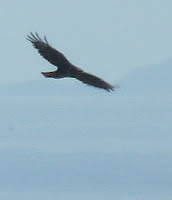 We looked at our map and discovered that these islands, a mere 12 miles from our shore, were indeed the Shiant Islands. 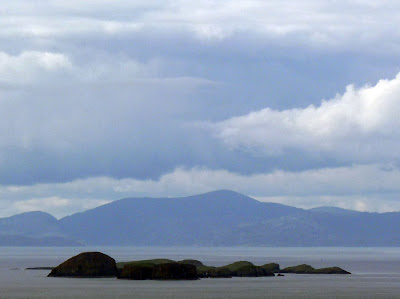 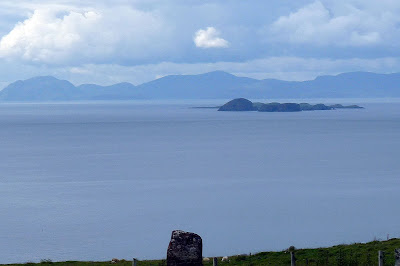 Above: the stone in the foreground is on Skye.
The Shiants are in the middle distance.
Harris lies beyond. 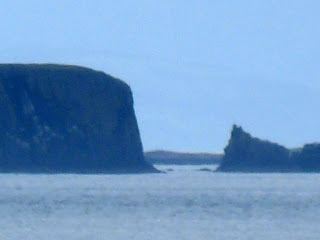 Above: close-up of the Shiant Island rock structure,
with steep column-like cliffs. 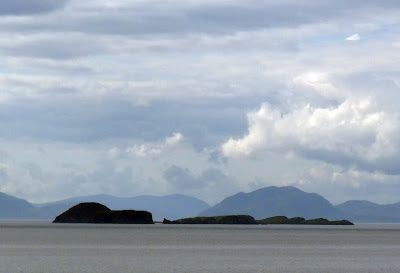 The islands consist of columns of Dolerite, and geologically are more akin to Staffa [of Fingal's Cave] than to the plethora of rock types found on Skye. They are home to huge colonies of Black Rats.

It may only be early August, but already the trees are turning here in South Wales, and there are signs of autumn. I have just read the update on the Skomer Island blog, informing us that following the fledging of this year's Pufflings, members of the Puffin colony have already left their island off the coast of Pembrokeshire for their winter voyage. You can read about them here. I find it incredible to think of these birds travelling so far north ... and then south again!


* On a previous visit we witnessed a scene of the purest light we have ever seen. It may not have been the aurora borealis, but it was the next best thing.

I truly love your photo of puffins. They are one of God's most adorable creations, and the thought of humans eating them is grossly repugnant.

I agree about Autumn beginning to show its face. This morning there were over two hundred swallows on the electric line across our yard.

I am interested in the book you mention as I have a bird watching friend who loves the Hebrides and Shetland - would it be suitable for her as a present, do you think? Her birthday is coming up and she is so hard to buy for as she has everything.

love the puffins too:)))

Very informative and up to date as usual - you're far more interesting than the News at Ten. Very charming puffon photo.

I have also read that book, and enjoyed it. For me, the best part was the chapter on the making of, and first sail in his boat. Just popping by, as I've been checking comments and can't remember if I ever replied to your question about John Buchan's adventure books (just finished reading his autobiographical work: 'Memory Hold the Door').